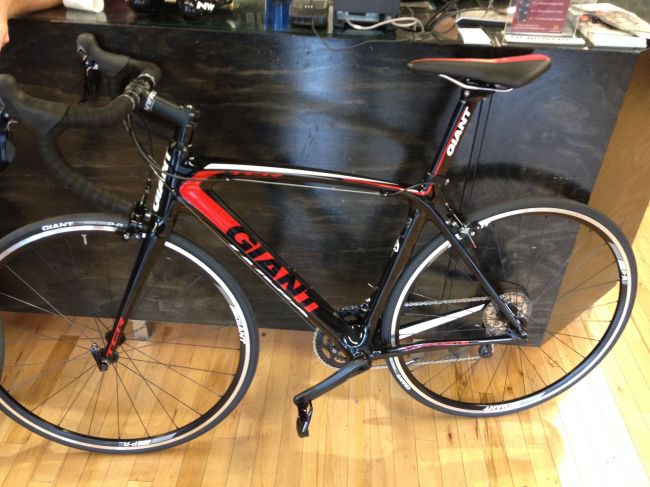 It’s black with a red racing trim. The pedals clip onto specially designed-shoes. It is narrow and compact, light as a feather. It’s not even made out of metal. (For bike geeks: it’s an all-carbon frame with 105 components.) For non-bike geeks: your average bike frame is made out of aluminum, which makes that characteristic ‘ting’ sound when you tap it. Aluminum is cheap, but also relatively stiff, making you feel every little vibration in the road. Carbon deadens some of those vibrations, while being incredibly light and strong.

It’s also delicate. While the material is strong under the conditions it’s designed for, such as holding up a rider, it’s not under other pressures. Bang it into a metal pole or drop it in a funny way and you may just snap the thing in half. When you tap it, it sort of feels like you’re touching a tree branch. Which is disconcerting.

It is designed to do one thing and one thing only – go fast. It’s utterly impractical for everything else. It’s $2,000 on wheels. You can’t leave it anywhere. There isn’t a lock expensive enough to put my mind at ease. And even if I could, the shoes have cleats, which means you can’t just walk around. And going offroad? Nope, not if you want to keep it in good condition.  It’s like a sports car. Beautiful and fast, but finicky.

So yesterday I took it out on its inaugural ride of the season, thinking this may be the last time.

And then there’s that feeling, as you pick up speed. The delicious pleasure of catching up to the cars. Of the wind in your face. The power in your legs. The control in your arms, steering you safely down a narrow strip of shoulder on a country road, between death and injury. Zooming down a tightrope at 40 km/hr.

Or there’s the quiet moments. Green fields and red farmhouses. The kind of vistas you just pass too quickly on a car to appreciate. Dirt roads and blue skies ahead. The sun at your back. An unending peace to your right and left.

And then there’s the pain. The hills that make you want to scream obscenities. The tense shoulders. The lactic acid in your legs that burns just a little hotter with every kilometre. And the numbness between your legs that makes you wonder if you’re actively hurting your chance at having children one day.

And yet, at the top of every hill, you feel more alive than ever. Like you’ve just conquered the world. Doesn’t matter that it was just a hill, and just a bicycle. It’s bliss.